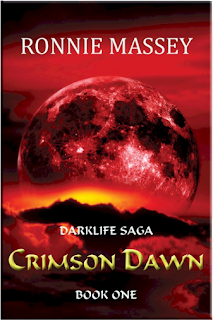 Tell us about yourself, Ronnie.
I'm an out, single mother of two wonderful girls.  Aside from writing, I work at a local Assisted Living Facility, with ALZ residents.  I have a healthy obsession with the Twilight Saga, which has led to my getting a Cullen Crest tattoo on my wrist.  I'm an all around creative person; I write, draw, paint, and sing.  My drawing morphed into tattooing and a rather large collection of body art.  I have somewhere in the neighborhood of 30 tattoos.

Where and/or how do you find the greatest inspiration?
I'm an avid reader, and love the paranormal and fantasy genres so many ideas have come from my thinking about particular authors storylines and wondering how I would have written a particular creature or paranormal race.  I also like folklore and mythology, so lots of idea's have sprang from those subjects.  I haven't tackled Greek and Roman mythology; just Egyptian, but it's coming.

Has your own life influenced your novels? And if so, how?
Yes, some aspects of my life have influenced my writing.  As a lesbian, I saw a lack of paranormal stories that had strong lesbian protagonist.  There are a few great ones out there, but in my opinion, nowhere nearly enough.  So with that in mind I decided to write my own paranormal novel with a lesbian protagonist.  I didn't want the a female character that thought she was attracted to women, but couldn't go there because it just wasn’t her, or anything like that.  So a good portion of my adult titles have lesbian protagonist.

Writing sex/romantic scenes can be a challenge for some authors. Do you find it difficult? If yes, how do you compensate? If no, where do you draw your inspiration?
Yes I find them to be a challenge at times.  The wording has to fit the character and story that you're writing, so I can't just have a character blurt out something that wouldn't fit their personality.  It's a headache trying to find ten or twelve different ways to say 'clit', and 'vagina' is not a sexy word at all.  Some days I just have to step away from the story because I stress to much over making sure it's right, take a breather, and come back with fresh eyes.  I can usually sit down and write it then.

Who is your favourite character, which you’ve created? And why?
I don't think I can pick one because I have so many characters that I love.  I can narrow it down to two; vampire, Valeria Trumaine, and Lawless, a type of Fae called an Omnimorph.  I love writing Val because she takes crap from no one and is very loyal and fiercely protective of the people that she loves.  Val is opinionated and mouthy and looks before she leaps, but she has a very good heart.
My reasons for my love of writing Lawless are very different.  I make Lawless a tattoo artist, so that's something I can relate to and know alot about.  I also made her a diehard Xena fan...that's me.  When I write, I sometimes see a particular actress or actor in my head as my character.  Whenever I write Lawless I see Rhona Mitra and Gabrielle Union, depending on what form she's in...both jaw dropping, smoking hot women.

Crimson Dawn isn't my newest release, but it is my non-self published title. It was published by Copperhill Media and rides the line between being a paranormal romance and urban fantasy.  The main protagonist is pureblood vampire Valeria Trumaine.
Crimson Dawn follows Val as she and her roommate, Irulan attempt to track down Val’s ex-fiance after he turns rouge.  It’s equal parts paranormal romance and urban fantasy.  The relationship between Val and Irulan is a driving force of the storyline, but there is loads of action.  Val is very ‘in-your-face’ and that gets her into a bit of trouble., more than once.
Irulan’s inclusion into the hunt for Tristan is unexpected and brings an entirely new set of problems to the table; one being the attraction between the two women that refuses to stay hidden anymore, and another being a secret from Ire’s past that turns the tide of their investigation.

Just for fun–
What is your favourite colour(s)?
Blue and black
Which do you prefer a great hero or a great villain?
A great hero.
What is your favourite movie? And why?
The Twilight Saga, all of them.  I am a diehard, uber, ultra, Twilight fan.  Don't know if it's because of Alice or what, but I love those movies and books.  My kids HATE anything Twilight related at this point.  Aside from them, next on my list is Underworld...Kate B. as a vamp, in all that black leather fighting Lycans...yup, I do love Underworld.
If you could be anyone in the world who would it be? And why?
Bill Gates. He's a great humanitarian. I would love to be in his shoes and contribute to some charities that I think are worth wild, like the Trevor Project and It Gets Better.
Where do you see your writing career in the next five to ten years?
I see myself as the owner of my own e-publishing company; which I am currently working towards with a partner.  In five years I will be on the fourth book of my DarkLife Saga, and also introduced readers to my Nephillim Chronicles, Freaks, and Wolves of Goose Creek Series.  In ten years I will have branched off from my DarkWorld stories and paranormal  / urban fantasy works, and delved into poetry and spoken word.

Blurb:
When vampire Valeria Trumaine comes home one morning to find her father waiting for her, she knows she’s about to get trouble in spades. But she never imagined it would come in the form of her ex-fiancé. Now she must confront old demons and face new possibilities as she struggles to bring the rouge vampire to justice.

After she left him, Valeria avoided Tristan like the plague, but now that he’s gone rogue, she’s going to have to utilize every thing she’s learned as a sentinel to find him. Finding Tristan proves to be more dangerous than anyone realized. He’s changed in unimaginable ways; becoming more powerful than his pursuers ever fathomed.

Refusing to let her face the abomination that Tristan has become, alone, Val’s best friend and Tuatha princess, Irulan, joins the hunt. Valeria will find that Irulan’s motives for keeping her safe aren’t what she thinks.  Soon she’s faced with an undeniable attraction that makes her question everything she knew about herself.

Crunch! I looked down at the broken glass under my foot and took a quick glance back at the sleeping man sprawled across the bed. Good – still asleep. The last thing I needed was for Michael… Mitch… Matthew… whatever his name is, to wake up while I was trying to make a smooth getaway before the sun got too high in the sky.

While the night before had proved to be very entertaining for us both, I wasn’t looking for anything beyond a one-night stand. As my luck would have it, I picked a guy that liked to cuddle after sex and actually talk about his feelings, most involving us getting to know each other better. Yeah – I’ll pass.

While the sex was good, I had my doubts that it was worth all this. Now I know that may sound rather whorish, but most Vampires don’t see promiscuity as such a terrible thing. Pain and pleasure go hand in hand for us; they increase our chances of having successful feedings. Humans don’t tend to take a few missing pints so bad if they’ve had an incredible night of sex the night before.

Maintaining anonymity does matter. To make sure I kept my own, I placed a few mental blocks in said cuddle bunny’s mind, (i.e. Glamour). I hate messing with people’s heads, but it was the only way to make sure he wouldn’t show up at my favorite Extras club, The Den, looking for me later. The next time he saw me he would vaguely remember some chick he thought he went to high school with. The blocks wouldn’t mean shit though if I couldn’t get out of the house without accidentally waking him. I’d go from last night’s thrill to trespassing burglar – Not high on my ‘to do’ list.

Fortunately, with a little burst of vamp speed I was out of the house and into my car in a matter of seconds, kicking myself the entire way for carelessly knocking over the glass in the first place. As soon as I slid into my leather seat and shut the door, my cell phone started to ring. I didn’t even have to look down to know that it was my roommate Irulan. She was the only person that would have the gall to call me in the morning when any decent Vampire was safely in bed.

Irulan huffed on the other end. I could almost see her green eyes rolling with aggravation. “Valeria, you’ve really got to work on your phone etiquette. You have all the social graces of a sloth.”

I shrugged my shoulders despite the fact that she couldn’t see them, and pulled my burgundy Fusion into traffic. “I knew it was you Ire, so why bother with the pleasantries?”

Instead of the snappy comeback I expected, I heard nothing but silence…

Thanks so much for doing this interview, Ronnie. Your book sounds good. I wish you the very best for the future!
Blak Rayne

Posted by Blak Rayne Books Blog at 2:30 AM