WHAT'S SO SEXY ABOUT TATTOOS? 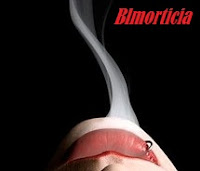 Greetings readers of Blak Raynes. Today, I’m doing a post about my other favorite thing besides, music, sex, and drinking… *ahem*  Tattoos.

What is it about a hot tattoo? I mean, it could be a sleeve full, on the chest, in other places that usually remained covered up. *snicker* One of my fave spots for a tattoo is on the lower back which is usually called a tramp stamp. To me it’s hot! Does it signify trampy, it might but hell, there are other more blatant things to show that.

What about a full back tattoo?

Ooh impressive! Pretty hot when there’s a hot man that’s sporting it and hopefully when these people consider getting them they think about how it looks on their fleshiest parts. Nothing worse than showing the ink and erm, the body is just uh, well, gross! *frowns*

Tattoos have been around for centuries and I’d say over the past few years they’ve become more mainstream. Now even what would be considered as the most conservative of people get little cutesy ink, like butterflies or flowers. Hey all of this is well and good but to me, the sexiest are the hot men and women that go all out. 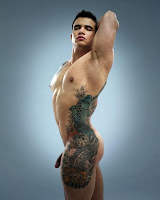 This is a great example of a man “going all out.” Wouldn’t you love to lick that? Trace the outlines of it with your tongue and give him as well as yourself a thrill by exploring his full body. Tell me that doesn’t make your mouth water. 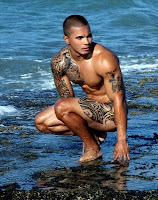 This one has them on several parts. Wonder what he has by his crotch? Could it be a tattoo? Maybe a piercing? Ink is just really hot and there’s no wonder why so many people are deciding to take the plunge.

So what about you? What do you find sexy about tats? Or if you don’t, why not? Leave your thoughts!

Will he do what his body wants? Will Alex accept his advances even though he will soon become Jimmy’s boss?

Shaking my head, I stop staring at him, going back to scraping. After a few moments, he stepped in. He looked tired. The sweat on his forehead was in beads. The double d tattoo on his right forearm that he said stood for Devin Davidson, his first boyfriend’s initials, was illuminated by the perspiration. Alex leaned against the wall. He put the mop and bucket down. “Hey man, why don’t you get going? I’ll finish up, yeah?”

I stopped to look at him. He began mopping in here, cleaning some spilled grease. “No, no, I wanna stay and help you, Al.” Since we’d become chummy, I called him Al. “I don’t have anywhere to go.” It was true, I didn’t. I hadn’t hooked up with hot pussy since he and I first met two weeks ago and honestly didn’t care to anymore.

“Well make yourself somewhere to go, huh? I got cleaning to do. I don’t need you hangin’ around the diner, tracking dirt everywhere while I’m trying to get the place clean. I’m sure that your little black book has some treats that you could find to get into for the evening,” he laughed.

“I don’t have a black book, besides, I thought we could go check out the game at Spock’s. The Cowboys and Eagles are playing tonight.”

“Yeah, I know. I thought I’d just go watch it at home. Not feeling up to going anywhere. I need to get used to these Friday rushes.”

“Oh yeah, well how about we go by your house and see it then, I’ll grab some…”

“No, really,” he interrupted and raised his hands. “I just wanna go take a shower and watch it in my bedroom. I know you’ve got no interest in seeing me stripped to my boxer briefs, so I’ll just go home alone.”

How do you know what I wanna see?

Annoyed, I placed the spatula on the grill. I sensed by his tone he really didn’t want me around, so since I felt we’d cultivated a friendship, I just came out and asked. “Al you tryin’ to get rid of me?”

He rolled his eyes and stopped pushing the mop. “Jimmy, I’m just tired is all. I wanna get this done so I can go home and enjoy the game. That isn’t tryin’ to get rid you…um…look we just don’t need to be spending much time together anymore, yeah? I’m your boss and you, well you’re my subordinate…we’re becoming too chummy in a very short amount of time.”

I exhaled and stepped closer to my friend, my boss to be. I patted his wet bicep that looked good enough to lick. I moistened my lips and peered into his beautiful brown eyes.

What the hell am I doing?

“Why all of a sudden are you sayin’ those things when you’ve been so friendly and open to me for these first couple of weeks, huh? You aren’t my boss yet.” I rubbed his muscle.

He winced and shrugged away. Alex stared at me like I had three heads.

Being only inches away from him made me want to do something I couldn’t believe. I wanted to kiss this guy. “Alex, c’mon, what’s the deal, man? I like being around you, we have a good time together.”

“Yes I know, but we’ve been hangin’ like every day. I don’t think you’ve had no pussy since that first night we met and I know I haven’t had any dick. What the fuck, man? It’s cool for us to be around each other sometimes but not every single fuckin’ evening…we aren’t datin’!”

I couldn’t resist running my hand through that long brown hair. Damn, it was sweaty. It felt good between my fingers. “Yeah, but we enjoy it so what’s the problem?”

His brows furrowed. Alex moved a couple steps away from me. “The problem is I like you, Jimmy. I like you too much, all right, and you’re not gay! It’s a fuckin’ piss poor shame that you aren’t either because we’ve got so much in common, you know. Just…” he stopped and shook his head. “I shouldn’t have even told you that. Just go man. I’ll catch you later.”

I locked my gaze with his and closed the gap in between us. I took his face in my hands, and yanked him into me. Once I did, I enveloped his lips. It felt amazing to finally have that soft and pouty mouth on top of mine. My balls drew up against my body and I felt the pressure in my groin.

On the inside, I had a mixture of emotions. Everything my dad told me as a boy flooded my brain. Real men cannot be in love with each other. The preacher in the pulpit talking about hell for homosexuals, the teasing and taunts of kids who were homos at high school, the random stupid talk on the street and my thoughts about how I could, in no possible way, be attracted to another man with all the pussy walking around. Well, here I was, kissing another guy and it felt so good to be in his arms, enjoying the tastes of the coffee he drank several times a day.

I grasped Alex in my arms, gripping onto his back.

He tried to struggle away from me but after awhile, he stopped fighting and reciprocated the embrace. Alex wrapped his hands around my waist.

I let my hands fall to his buttocks. I recalled that he liked to be a switch hitter.

“Shit…” he muttered. He engulfed my mouth once more.

We both gasped for air.

I nuzzled the side of his neck, smelling his cologne and Marlboros on his skin. The ardor from him was intoxicating.

Alex, damn it, I don’t care what other people think, I really do like you!