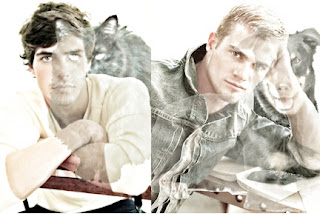 “Think they’ll actually show up?” Terry asked once he’d shifted back to his human form a few minutes after leaving John’s house.

“You were the lie detector, what do you think?” Alfie replied, keeping his eyes open for somewhere to park near the bike path.

“Unless they chicken out they’ll be there. And I don’t think they will. They hadn’t better because they’re the only ones we’ve talked to who seem to know ace-duce.”

“Makes me wonder if they picked the bike path for a reason. There’s lots of places along it a kid could use to go to ground if he’s careful.”

“We’ll find out soon enough,” Terry replied, seeing the two teens on the sidewalk just before they turned their bikes onto the ramp and disappeared from sight.

Alfie found a place to park at the same time and two minutes later he and Terry were walking down the ramp. The creek by the bike path was running high, the noise of it covering any sound of traffic from above them. The boys were sitting on rocks at the side of the creek, their bikes lying on the dirt close by. They looked up when Alfie and Terry approached.

Once Alfie had introduced Terry and the pair sat down beside the boys, Alfie got down to business. “Do you know where Rémy is?”

John shrugged one shoulder. “Maybe, maybe not. But if we do we’re not telling you or anyone.”

“All right. For the moment we’ll accept that. Do you know why he took off?”

“Yeah,” Mark replied after a quick glance at John. “He said someone threatened him. Well, not him but his family. He got a phone call.”

“So he packed up some clothes and things and left,” John said, continuing the story. “He called me and we met up, the three of us, ‘cause he’d already told us about what he thought about his brother’s death. Not the why, but that he was sure he’d been murdered. He wanted us to know why he was splitting.”

“Do you know if he was careful not to be followed?” Terry asked.

“Honestly, he didn’t say one way or the other but wouldn’t you keep an eye open for trouble if you’d been threatened?” John frowned, looking at Alfie. “You said you’re working for his folks. Are they, you know, okay?”

“They’re dealing as well as can be expected with his having run away.”

“Yeah, well good but I meant, they didn’t say anything about anyone bothering them?”

Terry shook his head. “They didn’t and I expect Mr. Reynard would have. You’re thinking about what the person who threatened Rémy told him.”

“I suspect that was just said to scare him into being quiet about whatever he found out. His folks should be okay since he’s not there. Why hurt them if he wouldn’t know it happened.” He looked at the two teens. “He wouldn’t find out would he?”

“Rémy wouldn’t find out from us,” John said, adding a hair too quickly. “I mean how could he? We don’t know where he is.”

“Except that he left the city.”

“Yeah but you don’t know where he went,” John replied defiantly.

“You do.” Terry looked at him and then Mark. “Look guys, I know you’re trying to keep him safe and you’re probably doing a decent job of it in your own way. However, if you’ve called him, or emailed him, someone who knows what they’re doing could track him down, especially if any of you said anything about where he was.”

John chewed his lip then said to Mark. “We fucked up.”

“Yep, I think so. So maybe these guys can unfuck things?”

Alfie chuckled. “Is that a word?”

“We can try. But one of you has to do something first. Text him to dump his phone in the nearest trash can or under the nearest rock, whatever.”

“Then how can he let us know where he is ‘cause you’ll need to know to find him.”

“Yeah, probably. But what if whoever’s looking for him already found him?”

“When’s the last time you heard from him?”

“Early this morning,” John replied. “We… he set it up that he’d check in every morning so we’d know he was okay. Just a fast text with a couple of key words in it so we’d know it was from him you know.”

John immediately opened his cell and sent the message. They all waited, willing his phone to ring. After a couple of minutes it did. John read the message and sighed in relief. “He’s okay.”

Alfie nodded. “Good. It may take him a while to find a safe place to call from. We can stay here or go get something to eat. I saw a coffee shop up Speer a bit.”

“Yeah, sure, that works,” John replied as he stood up. “I’m starting to feel like an icicle.”

But Alfie noticed he was on his feet seconds later, rubbing his arms, and said, “All right. Let’s go get some hot coffee in all of us, my treat.” 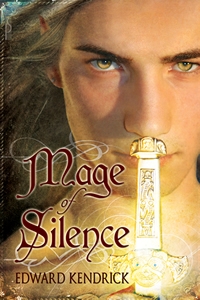 ‘Mage of Silence’ releases this Saturday, January 14, 2012 at Silver Publishing.

Blurb:
Castien, an elf mage who cannot speak except with the aid of a magical dagger, has been captured while on a mission. He is freed by his companion, the warrior elf Daeron, and returns with him to Daeron’s homeland. There they will join forces to rid the land of a Lord bent on the destruction of the elves.

Theirn, a young half-elf thief, attempts to rob Castien during his stay at an inn and is caught by the mage. Much against Theirn’s will he is enlisted into the group of rebel elves. But as Theirn's infatuation with Castien grows, he becomes more than eager to risk treachery, betrayal, and even death on dangerous missions just to be close to the man he is growing to love.
http://edwardkendrick.blogspot.com/
http://edwardkendrick.multiply.com/
http://www.goodreads.com/author/show/4541493.Edward_Kendrick
https://www.facebook.com/profile.php?id=100001159588331
Posted by Blak Rayne Books Blog at 9:35 PM