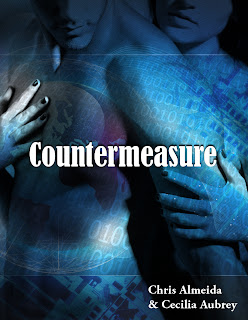 Tell us everything!
Chris and I have been writing together for about a year and half and as published authors for a year. Prior to that, my writing was for business publications and program materials. Chris used to write children’s stories when he was younger and pursued a Literature degree in University but eventually turned to technology and became a web designer. Our story started when we joined a Role Playing group on Facebook and were paired as a mated couple within the group. We found that we enjoyed the intense story lines we were writing and decided to take it further by writing erotica shorts.

Which appears first when contemplating a new project: A character, the plot and/or the title?
It usually starts with one of us yelling, “Hey! I have an idea” or “Hey! I have a scene in my head” and the other yelling back, “Write it down!” Each idea brings in the plot and characters simultaneously. So pretty much everyone comes to the party at the same time…geez we never follow convention.

What’s the hardest part of a novel for you to write: Beginning, middle and/or end?
Each has its smooth and rough patches.
Why?
Once we’re in the grove, we know roughly where we are going and the chapters burst forth on their own accord. Also, if a chapter from anywhere in the story is screaming to be written we never ignore the demand. For example, in Countermeasure, the last chapter was pretty much written while we were still in the early stages of putting the beginning of the story down on paper. So for us there’s really no beginning, middle or end. It all flows as one gigantic wave.

Writing sex/romantic scenes can be a challenge for some authors. Do you find it difficult? If yes, how do you compensate? If no, where do you draw your inspiration?
Surprisingly, this is an area that we don’t find difficult. We actually look forward to them. We draw inspiration from each other and from our characters.

Tell us about your newest release.
Countermeasure is our latest body of work, which is self-published under Éire Publishing. It is the first of a series involving Trevor Bauer and Cassandra James. In this first novel, Trevor Bauer, an NSA analyst is on the hunt for clues to his parent’s disappearance. Following a lead throws him in the path of Cassandra James, an ex CIA officer turned security assurance agent, who is on the trail of an infiltrator who stole a formula she was safeguarding. Thinking Trevor is her thief, she confronts him. Their meeting sets them on a course that neither expects.

What is your favourite colour(s)?
My favorite is blue and Cecilia’s is green.

Which do you prefer a great hero or a great villain?
Definitely the hero. But a strong villain makes the story more interesting.

What is your favourite movie? And why?
Chris has whispered in my ear that he enjoys the Bourne Identity Trilogy because the plot and action sequences are out of this world. I have to say Mission Impossible Series for the same reasons. I love the whole suspense thriller aspect notched up by action sequences.

If you could be anyone in the world who would it be? And why?
We are asked this question a lot. For me it would have to be Cassandra. Her independent but passionate nature intrigues me. I love that once she committed herself to Trevor she let loose and jumped in with both feet and never looked back. In some ways I already feel like her.
Chris has often expressed he would definitely be Trevor. His life since meeting Cassandra had gone from 0 to 100 in 5 seconds. The many adventures they get into while handling the recovery of data is what he considers a hell of a ride.

Where do you see your writing career in the next five to ten years?
Hopefully to have established a foothold in the industry. But either way, we will still be here. Knee deep in writing the stories we like, getting them into the hands of the readers, and sharing what we’ve learned along the way with others.

Blurb:
Suspicious and determined never to fall into the love trap, security specialist Cassandra James takes on a chase to recover files stolen right out from under her nose. In an effort to prove to her father—also her boss—that she is a capable woman, she follows the digital trail—a trail that leads her directly into the arms of Trevor Bauer, an NSA analyst who appears to have more secrets than she has scars...

Haunted by the mystery surrounding his parents' disappearance, Trevor Bauer's dreams for his own life have been put on hold. But being confronted by Cassandra James derails every one of his best laid plans to avoid a relationship until he can find the closure he desperately seeks. When he accepts her request for help in recovering the files she's hunting, they embark on an adventure that takes them across the ocean and into a world of intrigue and violence. As things between them begin to heat up, Trevor realizes that, if he is ever to win Cassandra's heart and the future he craves, he has no choice but to reveal all his secrets.
Excerpt:
Without a word, she turned her back to him and headed for her door. Before she could reach it, Trevor grabbed her arm and pinned her to the wall. Cassandra struggled and Trevor groaned inside at the feel of her body pressed tight against his. "Damn it, Cassandra. Hold still for a second."

Her heart drummed rapidly against his chest and he saw her pulse beating at the base of her throat. He didn't like using his size against her, but he needed her to understand. "This is not about obsession, and I sure as hell am not like your friend, who, by the way, sounds like an ass. This is about friends caring about friends. You said you wanted us to be friends. You wanted us to be a team, and yet you took off and never checked back with me. The next thing I knew, almost an hour had gone by and I had no clue where you were. We know there is something bigger happening behind the scenes, that Allison didn't act alone. What if you had been hurt?"

"I'm a big girl. I can take care of myself," Cassandra breathed hard in agitation, and bucked against him, still trying to push his body away.

Trevor banked the urge to press harder against her. He continued to pin her arms above her head and put some space between them. "I know you can take care of yourself, but friends are going to worry about your well-being, whether you want it or not—whether you like it or not."

Trevor grew distracted by the feel of Cassandra's sweet breath against his skin and leaned slightly forward. "All I'm asking is that you let me know next time so I can be there for you. With you."

By the time he finished his statement, his lips were mere inches from hers. His mind went into overdrive and the need to taste the texture of her lips overrode his common sense. When her lips parted to protest, he silenced her by capturing her mouth with his.

The kiss made him numb to his surroundings. His sole focus became the softness of her full lips and the mingling of their tastes. Slowly, he released her hands and cupped her face with his, deepening the kiss. A jolt of electricity hit him when she responded, kissing him back just as urgently. Her freed hands gripped his forearms tightly and the kiss grew hot and deep—tongues exploring, teeth nipping.
In a flash, Cassandra pushed him from her. Both froze and stared into each other's eyes. Before he could comment, she slipped into her room and softly closed the door between them. Trevor stared at the door and ran his fingers through his hair. His arms felt empty without her. The taste of her on his lips was sweeter than he had ever dreamed.

Purchase Link: http://www.amazon.com/dp/B006WFMMI0
Thanks for the great interview Chris and Cecilia! It was a treat to have you both, and I wish you the best of success!
Blak Rayne
Posted by Blak Rayne Books Blog at 10:30 PM