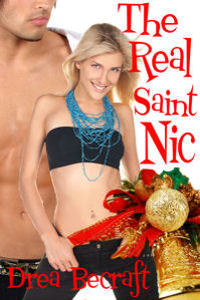 Thank you so much for having me on your blog today Blak.

I have most of my outside family already bought for but my children only a few things so far.  I am so looking forward to seeing all the faces of my loved ones as they open their gifts.

Below is the info on my newest release The Real Saint Nic…ONLY $0.99...I hope it strikes your fancy.

Free Read (My Wish For Christmas Is You): Dreabecraft.com

ARe: The Real Saint Nic

Aimee’s life changed one night, not long ago, when she staked a vampire to save another. Still reeling from that life changing night, Aimee decides to go home with Brenda, her best friend, for the holidays. She never expected Brenda’s brother, who comes off more like the Grinch then Santa, to have so many saint like qualities. Years spent alone, with no family or friends, plays heavy on her mind but Nic could possible be the one who changes it all.

has always been a sore spot for Nicolai. He’s the real saint Nic, but society has him all wrong. He’s no saint. In truth, he’s a vampire. Over the centuries, Nic has spent the holidays fighting off the ridicule from his younger brother and giving to those less fortune, not seeing his own worth. Until one mortal, brought home by his sister Brenda, changes the holiday and his outlook on life for eternity.

Is it possible that Nic has finally found his Mrs. Clause? When worlds meld, can Aimee find the happy ever after she once asked Santa for so many years ago, or is she doomed to spend forever lonely on Christmas?

With a flick of his hand, the lights next to the bed turned on as did a few lamps across the room. Once my eyes adjusted, I got a better look at the amount of presents. Hundreds, littered the room. The only space not filled was around the bed and a path to two doors in opposite directions. Red, green, and golds splattered the room in a festive show of color.

“You really are Saint Nic.” Astonished I tried desperately to keep my mouth closed.

“Please don’t call me that.”

“Why not?” Turning away from the presents I turned my gaze to Nic’s in question.

“Because I’m nowhere near a saint.” Brows furrowing Nic stared intently at the computer screen.

“Then how did you get the name?”

“That would be Jaysen’s doing. One day, not to long after I started giving the gifts, we got into an argument. I don’t remember most of what was said, after all, it was quite a while ago, but I do remember the comment was rather snide. To this day neither of us knows how it ended up outside our argument, but it still reminds me of that comment. Besides saints are deemed so because of the greatness they do for mankind all I do is give a few toys to some kids.”

Moved by the noticeable hurt in his eyes, a relentless knot twisted in my stomach. Though I still didn’t know him, the connection between us grew with each passing moment.

Whether it was hormones or the fact that we were supposed to be mates, I didn’t know, but I couldn’t stand to see him sad.

I scooted out of the bed and made my way to him, wrapping paper shuffling under my feet. Then, as if it were the most natural thing to do, I lowered myself into his lap and hugged him close. “To those kids you are the world.”

“That’s why I do it every year. Though not in the grand scale that everyone thinks. I try to help at least a few orphanages and hospitals each year.”

“See, you are a saint. Every year you create the biggest rush of hope and joy to the children across the world. Though you can‘t help them all, the small sacrifices you have made over the centuries have helped to shape our world and helps friends and families learn the true meaning of giving. Without you there would be no hope of a perfect
Christmas. If that isn‘t the act of a saint, I don‘t know what is.”

With a grunt in my ear, Nic’s arms tightened around me as he buried his head in the hair between my shoulder blade and ear.

Pulling away slightly, I raised my hands and held of each side of his head. My fingers ran though the silken strands of his hair using that leverage I brought his head up until our eyes met. Leaning down I kissed his full lips with a slight brush of mine.

You are the best mate anyone could ask for. Speaking while our mouths were still fused, Nic sipped from my lips slowly.

Thanks for the great excerpt, Drea. I hope the book does well and I wish you the best of success into the future!
Blak Rayne