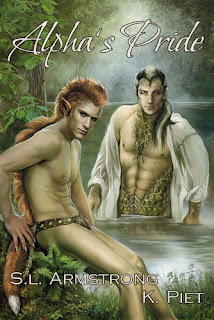 As far as author's go I've met (via the Internet) quite a few - some bigger names and others newbies. I've even chatted a couple up over the phone. LOL And K. Piet is one of the nicest. Anyway, enough of my babble. Welcome Kris!

Tell us about yourself.
I grew up in Norther Arizona (which looks and feels more like Colorado), and I miss the snow now that I live in Florida! I'm a circus freak turned writer. I love the circus arts and have been inspired by acrobatics and dance since I was very young. In fact, it was my love of Cirque du Soleil that got me into massage therapy, which is my day job these days. I love it! Plus, it kind of leads into my answer for the next question...

When did you know you wanted to become a writer?
I actually didn't get a start in writing until college. Other than essays and research papers for college, I didn't write until I started roleplaying and writing fanfiction with S.L. Armstrong. I'd been a fan of her fanfiction work for a good long while, and what started as a simple collaboration online with borrowed characters has become a lifetime partnership through the founding of Storm Moon Press in order to publish all the original ideas we now share! I didn't know until I was in my last year of college that I wanted to write and publish my work.

Where and/or how do you find the greatest inspiration?
It's usually from a really great piece of music. I have eclectic tastes, so I get different story ideas from varied styles of music, from techno and new age all the way to heavy metal and folk music! I also get very inspired by the human form. There is something so beautiful to me about the human body. My fascination with it fueled my schooling in Kinesiology (the study of human body movement), and it also translates into my writing. I see the body do amazing things or even just an artful nude photograph, and my mind weaves stories around the images.

What’s the hardest part of a novel for you to write: Beginning, middle and/or end? Why?
The beginning. Hands down. I have the worst time getting the first couple paragraphs of anything down onto the page. A new manuscript, a single scene, a blurb, anything. It takes me a while to get into my groove, but then I'm good to go.

Writing sex/romantic scenes can be a challenge for some authors. Do you find it difficult? If yes, how do you compensate? If no, from where do you draw your inspiration?
Typically, no, I don't find it difficult at all! My inspiration, once again, usually has its base in the beauty of the human form. When it comes to sex scenes, I'm a very visual-kinesthetic writer in that I love to be able to see the scene in my head and act it out if necessary. There are times that I gesture while writing or even act something out for myself, just to make sure that I write things accurately. It makes it kind of fun! 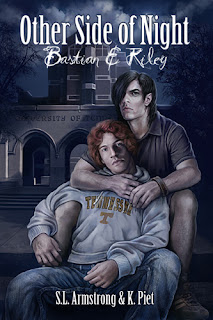 Do you have a method you use to write the sensual parts? Do you prefer the sex to be open and bold? Or left to the imagination?
While fade-to-black has its time and place, I'm more a fan of open and bold when it comes to the sensual and sexual in my fiction. I don't feel like I have to hide any act from my readers—they're big boys and girls by now, right?—so unless it throws the pacing of the story off, I'm very out and proud with the sex scenes in my fiction.

Who is your favorite character, which you’ve created? And why?
It changes with the seasons, it seems. I'm currently very much in love with the interpretation of Dorian Gray that S.L. Armstrong and I have been working with for a trilogy of books that are currently under the working title Immortal Sonata. I suppose part of the joy of the character is that you have an amazing base to work from with Oscar Wilde's depiction, but we take Dorian several steps further to show the true damage Henry did to him and how it affects his relationships throughout the years. He's a very debauched, unapologetic, sexy character, but he's also incredibly tortured, and when he is faced with the possibility of loving someone instead of simply using them for his own devices, it's fascinating to watch him struggle with the vulnerability he hides so well with sensuality and a pretty face.

Tell us about your newest release!
My most recent novella with S.L. Armstrong, Other Side of Night: Bastian & Riley, was released in September and features college boys and vampires. It's the first in a series that explores the urban fantasy/paranormal world we've set the characters in.  December 9th, 2011 also marks the release of Alpha's Pride, a short story I wrote with S.L. Armstrong for the Wild Passions anthology. It's a sneak peek into a vast fantasy world that S.L. and I have been forming over the last few years and plan to expand very soon. Read a bit about it below!

Blurb: Alec and Nahale are feral-Maith, genetic offshoots from a fantastic race. Their clan is home to many kinds of feral characteristics, but the powerful predators—wolves and felines alike—are the protectors, hunters, and leaders. Both Alec and Nahele enjoy their arrangement, finding pleasure with one another away from prying eyes, but Alec's worries about their clan's security have long fallen on deaf ears.  Under pressure, Alec challenges Nahale for leadership of their clan, threatening to destroy the relationship they'd been building for years. Nahele is anything but weak, and his stubbornness could endanger the clan's stability, not to mention his own life. When push comes to shove, Nahele is confronted with the most difficult choice a leader can face: resist and maintain his pride or yield control of the clan to the feral-Maith he once trusted.

Alec stopped on the opposite side of the small bonfire Nahele, Hyrad, and three of the elder clan members claimed as their own. Nahele smiled when he approached, but when their eyes met, the smile faded.

It was now or never. Alec took a deep breath, his voice carrying easily when he spoke. "Nahele, you are no longer fit to be alpha," he said, and was surprised that his voice was so steady. "It's time for you to step down and another to step up."

The gathering all but exploded into a sea of murmurs, and Alec watched Nahele's eyes grow wide with shock. The seconds it took for that shock to turn to anger were like an eternity as Alec stood there, refusing to step back or show any sign of weakness.

"Silence!" Nahele roared, and the clan immediately hushed, all eyes turning to Nahele as he stood. "I have served this clan for centuries. I have helped us unite, grow, and prosper." Nahele's eyes bored into Alec. "I will not yield my position, nor will I step down."

Alec felt his heart pound in his throat, but he allowed himself only one swallow, his tail swishing behind him resolutely. "Then I challenge you for the title of alpha and will meet you in the challenge field to prove myself your worthy successor."

The crowd of feral-Maith broke out into murmurs again. A few even cheered him on, clapping and yelling encouragements. Alec thought he might be sick just from the effort it took not to tremble in the swarm of energy around him. Before he could show any sign of his condition, he turned abruptly and walked away from the bonfires toward the clearing where the fight would take place.

What is your favorite color(s)?
It's a cop-out, but I love rainbows. If I had to choose a single color, though, it would be green, especially the vibrant green you see when the sun shines through leaves.

Which do you prefer a great hero or a great villain?
A great hero. Now, that doesn't mean that I don't want a great villain to make it difficult for that hero, but when it comes right down to it, I have to be able to relate to the hero as a character, to love the depth of him/her, or I simply won't care what happens to them throughout the book. I think that's the greatest tragedy of some books: having wonderful plots but heroes that don't carry any weight or make me care about that plot.

What is your favorite movie? And why?
Always a difficult question! Tolkien's world has always been an inspiration, so I'm tempted to put the Lord of the Rings trilogy at the top just for its sweeping storyline and the depth of the canon and world. As far as art direction goes, I loved The Labyrinth (Brian Froud's conceptual work is stellar), and for a much-needed laugh, I'll always turn to In & Out with Kevin Kline.

If you could be anyone in the world who would it be? And why?
John Barrowman. I could go on and on about why, but suffice it to say that I've always had a soft spot for musical theatre and acting, but never pursued it. I also love how active he is in the GLBT community. Plus, who wouldn't want to have a great singing voice, endless charm, and be bidialectal? :D

Where do you see your writing career in the next five to ten years?
More of the same as well as more of something more. I know that's rather vague, but I'd love to continue writing quality fiction and improve on my craft, as well as finally put out stories that have been in my head (and S.L. Armstrong's head, which we often joke that we share) for the last three years. We have paranormal themes, contemporary stories, and a sweeping fantasy world to explore and share with readers, so I really look forward to doing that over the next five to ten years! I hope everyone enjoys the ride!