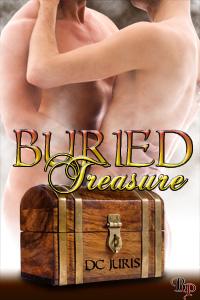 People always ask me if I identify with any of my characters, what they've been through, etc. While I always have to answer absolutely, sometimes, I identify with characters a little too much. That's exactly what happened with my character Mark, from "Buried Treasure," whose father is in a nursing home.

When I was in junior high, my grandmother became terminally ill with cancer. Unbeknownst to the family, she'd actually had it for quite some time, and just never went to the doctor. That's how my family was–very hush, hush about things, never sharing, never talking. My mother and her sisters went into immediate action after the diagnosis, searching for all sorts of medical options. The bottom line was that my grandmother was in her late eighties with cancer in pretty much every organ. Although one of my aunts demanded chemotherapy, my grandmother's doctor refused, based on my grandmother's wishes.

Since grandmother couldn't take care of herself anymore, the family ended up putting her in a nursing home, completely unlike the one in "Buried Treasure", she was often left unmonitored with no one looking after her. Things went from bad to horrible when she started showing signs of dementia and Alzheimer's. We never knew which grandmother we were going to see–the one who loved us, or the one who thought we were trying to steal her things. The one who remembered us, or the one who demanded to know why we were lying to her, and where her real family was.  The kind, gentle, woman, or the hostile, hateful one who threw things at us.

You see, my grandmother wasn't always the woman I knew her to be. In her youth, when she'd been raising my mother and my aunts, my grandmother was an abusive person, physically and mentally. By the time I came along, she'd drastically changed. She was caring, kind, never raised her voice. Which isn't to say that she didn't give it to you straight –you always knew where you stood in my grandmother's eyes. Sometimes, that wasn't such a good thing. LOL

That was the hardest part of watching her fade away – watching her revert to that person she'd been before. You could see the confusion in her eyes, sometimes. Like she didn't really understand why she was being mean either, just that she was, and you were in front of her. In the end, things progressed as can be imagined, and she passed away.

But, out of that emotional perfect storm, came wisdom and strength. Watching my aunts (not so much my mother) take what my grandmother dished out on a weekly basis, watching them persevere, unbending under the onslaught, watching them treat my grandmother with nothing but respect no matter what she hurled at them – verbal or physical. So when the character of Mark popped into my head, I instantly identified with him and what he'd been through with his father.

Despite the gloomy overtones at some points, I really enjoyed writing "Buried Treasure". Often times, my characters and I have a great deal in common, but usually not on childhood issues. In a way, it was like chatting with an old friend, reminiscing over things we'd seen and heard, laughing at things that most people wouldn't find funny (there is a certain humor to a wizened, eighty-eight year old woman fast balling a TV Guide at your head as though she's a pitcher for the Yankees, trust me).

I hope my readers like "Buried Treasure" as much as I do. I'm certainly happy to bring the story to you.