BL: Hiya peeps. This is your resident Wicked gal coming to you with another interview with one of my characters. I really love these. It gives you, the reader, the chance to interact with a fictional person and come into their world.

Now, without further ado, I’d like to introduce to you, Nathan Ellerby from my first gay novella, My Lieutenant coming out November 3rd from Rebel Ink Press. He’s my main character who is… ah hell, let him tell ya! I swear I’ve been hanging around Mandrake too long and becoming stuffy. What’s up Nathan?

Nathan: How are you, BL, good to be here!

BL: Good to see you too. By the way, where’s that hot man of yours?

Nathan: *grins and tugs at crotch* Ah, he’s a little tired. We finally flip flopped and well, let’s just say I’d been waiting to do that for a while. He sends his best.

BL: Whoa! Now that’s hot and why didn’t you too invite me to watch?

Nathan: Hunny, write it! *smacks lips and rolls eyes* You’ve gotta vivid imagination. Let that take over and put it down for the next book.

BL: Which we’ll be working on in about two weeks. Before we talk about that, tell us about book one?

Nathan: Well, the story is basically about my reluctance to be in a committed relationship. It’s comical because you’re writing it and it’s sexy, lighthearted. A lot more of a Rawiya story but I’m glad you took it on.

BL: Yeah well, she can be funny but not as much of a smart ass like me. I’m the queen of sarcasm. Let’s just say, the two of you in these two books are the beginning of BL’s career, you know how you kind of like to play it safe and then bam!

Nathan: Bam, something like You Don’t Ask comes out?

BL: That’s right sweet cheeks! *winks* Getting back to you, in our talk with Bryant, or the Lieutenant Bryant Duncan, he called you a card. What’s the reason behind that?

Nathan: I’m a smart ass much like you. I can’t take a lot of things seriously. If I wasn’t an artist I might be doing stand up in NY or Chicago. *laughs* I’m also quite the prankster as you’ll find out in book two.

BL: OOOHhh, looking forward to it. What’s one word to describe Bryant?

Nathan: Shit, only one? Okay, if you must make me narrow it down he’s simply marvelous. The man is a saint and has so much going for him…okay you only said one word but you realize who we’re talking about here. A true hero! A man who went overseas to fight for our country and did it while hiding his sexuality and living a lie. How could someone do that and not lose their mind?

BL: So true. Well, since the DADT repeal is coming, answer for him: What would he say about it?

Nathan: He’s already talked about it being just a small step and nothing more. He believes it will put other gay and lesbian soldiers at ease but it won’t stop the taunting.

BL: Well, here’s hoping. Okay, let’s get back to the fun stuff. The serious things are totally Michael’s deal but anyway, if you could jump into one of the other muses stories, published or not, what would it be?

Nathan: Wow, now there’s a question. *puts his hand on his chin* I think I’d have to say, Masquerade by Rawiya. Since we are going down to New Orleans. *grins*

BL: You bastard, you will be in that book. *BL playfully kicks at Nathan* anyways let’s wrap this up, if there was anything you could change in the real world, what would it be?

Nathan: What did my hunny say?

Nathan: Ah, okay, well, same for me and I’d abolish DOMA right now.  We all should have the right to marry shouldn’t we?

BL: I couldn’t agree more, babe. Okay, it’s been fab asking you a couple of questions and thanks for being such a great MC. I know we’ll be having fun in the coming weeks.

Nathan: Yes we will, BL. It was a pleasure. Readers, go buy our book! 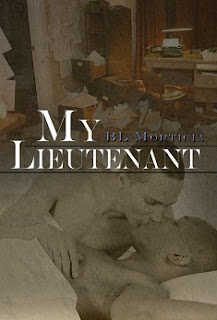 Nathan Ellerby's apartment has been ransacked by his ex who didn't like the fact Nathan dumped him. Trouncing through the debris uttering a string of obscenities, Nathan's shocked to see Lieutenant Bryant Duncan at his door claiming he's already caught the offender. Sensing an instant connection, when Nathan finds out Bryant's divorced and he's straddling the fence between being gay or bisexual, Nathan finds himself in a quandary. .

Although the Lieutenant does everything in his power to prove to Nathan he's worthy, Nathan is afraid to lower his defenses, which leaves both men wondering if Nathan will allow love into his life even through his doubts.

I kept walking through in horror as I saw all my personal belongings strewn about. My latest sketches torn to bits. “Goddamnit!” I pulled my phone out of my pocket when I heard a knock at my door.

“Who is it,” I called out in a menacing tone, trouncing through shredded paper. There was no answer. “I said…” I looked through the peephole at what appeared to be a handsome man. I still didn’t open the door. “Hello!”

“Hey, listen, I caught the guys that went through your things.”

“Seriously?” I opened up the door slowly only to lock eyes with the most, gorgeous man I’d ever laid eyes on.

He smiled at me, moistening his lips. “Hey, I’m new to the building. My name’s Bryant Duncan.” He put out his hand.

I accepted it. His hands were warm but kind of rough just the way I like them. That moment, the feeling of his skin on top of mine sent heat to my groin. I took a whiff of his cologne. “Nice to meet you, Mr…”

“Call me Bryant, please. Like I was sayin’, I saw the bastards going through your place. When they saw me, they tried to get away but naturally, they couldn’t outrun me.  I called the cops once I got the building security to come up and help detain then.” He rubbed his neck. “They need a statement from you to press charges.”

“You didn’t have to.” I was so impressed that he cared enough to put his life on the line. So much, I didn’t tell him my damn name.

We stood silent a minute.

“I’m sorry, you said your name was…” Bryant raised an eyebrow.

We gripped each other’s palm tightly. “Good to meet you, Nathan. Like I said, you need to speak to the police. I got the information.” He released my hand and my gaze. Bryant reached into his back pocket of his loose, fitting jeans.

I couldn’t help but follow his arms. They were so big, muscular. I could imagine those cradling me during the night.

We’d obviously made a connection.

Thanks for stopping by BL, it's always a pleasure to have you. I can't wait for this book! Congrats on the up coming release!
Blak Rayne