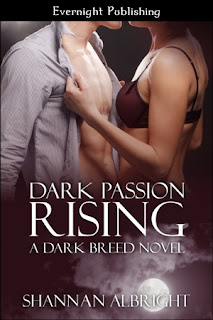 When did you know you wanted to become a writer?
I got bit by the writing bug at eleven when I read Gone with the Wind, but didn’t really start to write until after reading Sweet Savage Love by Rosemary Rogers. I was sixteen at the time and it rocked my world. I started putting my ideas on paper right after reading the first book and have written ever since.

Where and/or how do you find the greatest inspiration?
I am an avid reader as well as a writer. I find reading JR Ward, Sherrilyn Kenyon just to name a few keep me hungry to write. When that won’t work I oil paint and this helps me to work out problem areas.

What made you chose to write paranormal romance/urban fantasy literature in particular? And is there any other genre you’d like to write? And if so, why?
I’m a romantic by heart and gravitate more to the sensual side of sex. Touch, sight, taste and emotion are what trigger my muse. Getting into erotica was something I didn’t really set out to do. I am character and plot driven, the sex is the cherry on top and gives my stories depth and a satisfying ending. I mainly write Paranormal and Urban Fantasy romance since I love the world building and the darkness, redemption theme I find so compelling.

Which appears first when contemplating a new project: A character, the plot and/or the title?
The character is first if I’m working on a series, the plot is woven into the characters personality and weaknesses and his or her personal conflict that makes him who he is at the beginning of his or her book. If I’m working on a non series story, then it’s the plot first followed by characterization. In every case the title is something that comes to me around chapter 3 when I have a deeper sense of the story.

What’s the hardest part of a novel for you to write: Beginning, middle and/or end? Why?
The middle is the killer for me. To keep the tension and interest while not showing too much of where the plot is going is hard. Keeping a readers interest can be challenging since you can’t have action in every scene you must give them a hook to keep them turning the page. By the middle of the book I find it challenging to keep it as fresh as the first chapter.

Has your own life influenced your novels? And if so, how?
Absolutely. When I started writing I was 16 I didn’t really know much about what love and zilch about sex. In my early twenties there were still things I couldn’t relate to since I never personally experienced them. I believe you need to experience life. Love, loss, courage to love again to have the depth involved in a good story. This doesn’t mean everyone needs to live before writing, it was just what worked out to be true in my case.

Writing sex/romantic scenes can be a challenge for some authors. Do you find it difficult? If yes, how do you compensate? If no, where do you draw your inspiration?
Surprisingly enough, I have found them easy to write. My inspiration comes from my wonderful husband and let’s just say he keeps the spice going in our love life.

Do you have a method you use to write the sensual parts? Do you prefer the sex to be open and bold? Or left to the imagination?
I am open and bold all the way. I love my cherry on top. Perhaps this stems from my childhood. My mother was very open when it came to any questions I had concerning sex. Nothing I asked was taboo with her. Something I’m very grateful for.

Are your characters based on people you know? Or are they completely fictitious?
Completely fictitious. I take things I like about people and mix it all up. I find people watching a great help in finding my characters. Living in Las Vegas is a great place to study human behavior the good and bad.

Who is your favorite character, which you’ve created? And why?
I just finished the second book in my Dark Breed series and found the hero Tegan Murin to be so far my favorite. He’s a were-panther and as such he has a lot of characteristics of a cat. He is moody, contrary and was quite difficult to write. He is total emotion all the way, and very sensual. Tegan was the most challenging to write, but the best character so far.

Tell us about your newest release. Please list publisher/purchase link/book cover/blurb and excerpt.
I have two in process of releasing. Passions Flight: A Dark Breed Novel through Evernight Publishing and Beloved Wizard through Extasy Books. Beloved Wizard Book 1 of the Knights of Excalibur. The first book in the Dark Breed

You can buy my first book of the Dark Breed series at:
Purchase: Dark Passion Rising

Blurb:
Tambra Ellis has just had her world turned upside down! Surviving a bite from a Lycan, attracted to one hot vampire guy and now she has to look forward to turning into something from some bad werewolf movie.
Marcus Valerian has enough on his plate without the added complication of Tambra Ellis. Fiery and independent? Sure. Beautiful with a body made for sin? Oh Yeh. And a human cop. Tambra is everything he needs to stay away from.
As leader of the Tribunal’s enforcers it’s up to him to find out why the Dark Breeds are going feral and killing humans in ever increasing numbers. Tambra’s life is in the balance as the secrets of her past place her in the middle of old deceits and a betrayal that will change the world forever.
Will Marcus and Tambra’s love survive or will it be too late.

Excerpt:
Marcus moved to the door in a burst of speed, and stopped with his arms folded across his chest, lips compressed into a thin line as he glared at her.  He drew his brows low in a scowl.
“W…what the hell are you?” she stammered, unable to mask her unease.
“I am not here to harm you.  I have been the one tending to you as your body adjusted.”
“You haven’t answered my question,” she pushed.
“That’s because it’s not relevant to the situation.”
“Like hell, asshole.  If it affects me then it is my business.”
Marcus liked her toughness, finding it remarkably refreshing.  Her strength was impressive, not many could make it through the beginning stages of the change when turning from human to Were, yet she had fought through it.  She had overcome it all, despite how badly she had been injured.
He used his most reasonable tone to calm her, knowing that the next few minutes was crucial to keeping her receptive to what he had to say.  He took a deep breath and let it out slowly, making his tone as calm as he could manage.  “At this time the only thing we need to focus on is your change.  You are not out of the woods as of yet.  There are too many things that could go wrong.”
Her eyes widened in horror as she took a shaky step backward.
“Oh, God.  This isn’t happening.  It can’t be real.  Werewolves don’t exist.”
“Believe me, they do exist.  Denying what you have seen will be foolish and dangerous, for you and everyone you’re around.”
“No.  I don’t believe this.  I won’t believe it.  There has to be some logical explanation for what I saw.”  The sharp edge of hysteria rose in her voice.  “I will not turn into a dog.   I don’t even like dogs.”
That made him smile despite the seriousness of the situation.  She was absolutely adorable and he was in deep shit because of it.  Yet, he couldn’t seem to make himself care. “Wolf, not dog.  You were bitten by a Lycan, not Lassie.”
“Ha, ha, laugh it up big guy.  You don’t have to worry about fleas.”
Laughter rumbled out of him, surprising him as much as it seemed to anger her.  Tambra stood in front of him, her golden hair tumbling wildly down her back, clutching the comforter tightly to her breasts.  Her blue eyes glittered with anger and Marcus fought the urge to pull her into his arms and stroke her soft, creamy skin.  He clenched his hands into fists and kept still.  She was still too pale, evidence of the weakness he knew was plaguing her but, damn, she was magnificent.  A true warrior, ready to fight regardless of the fact she couldn’t win.
His blood headed south as he remembered stripping her out of her torn and bloody uniform, seeing her full breasts, tipped with pink nipples that begged him to take them into his mouth.  Her tiny waist smoothing into shapely hips and a firm and heart shaped ass.  He wondered how it would feel in his hands.  Her legs were long and lean, he wanted them wrapped around him while he filled her, wanted her screaming his name with her release.  She was heartbreakingly beautiful and though he knew it was wrong, he was sorely tempted to risk it just to feel her lips against his, her taste in his mouth.
That was not going to happen, he reminded himself, burying his attraction in the deep recesses of his being, where it could be locked down tight.
If Tambra survived the Rising, Fox would demand to take her, acclimatize her to her new existence, and teach her the laws of living under Lycan rule.  Marcus would never see her again.

Just for fun–What is your favourite colour(s)?
Black, Blue, Purple and Red are what I wear.
Which do you prefer a great hero or a great villain?
I love a great villain, there are as much fun to write as they are to read.
What is your favourite movie? And why?
Oh gosh, I have so many I love! Ladyhawke, When Harry met Sally, Beaches, Gone with the Wind of course, 300 and I could just keep going.
If you could be anyone in the world who would it be? And why?
Hum living or dead? I’m drawn to Queen Elizabeth 1. That was quite a lady. Smart and such a strong ruler who truly loved her subjects. She did a lot for her people starting a school for children, apprenticeships to teach them a trade and she also set up the first hospitals for the sick. She went out among her people listening to their concerns.
Where do you see your writing career in the next five to ten years?
In five I hope to be able to write for a living instead of juggling a full time job with writing. In ten I would love to be a New York Times Bestselling author. Hey, if you’re going to dream, dream big and aim for the brass ring.
Thanks for stopping by, Shannan. Your book sounds great! I wish you the very best of success for the future.
Blak Rayne