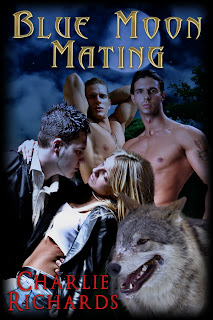 Welcome to BRB, sweeties! It's author interview Wednesday. I enjoy reading the interviews and meeting fellow writers. It's truly inspirational sometimes and equally as interesting. But today is a little extra special as I've got a fellow eXtasy author here, Charlie Richards. It's always wonderful have authors from the same publisher!

Who is Charlie Richards?
The best description I can give is a laidback nature-lover. When I’m not researching and writing my next story, I enjoy reading, horseback riding, hiking, 4-wheeling, and motorcycle riding with my husband and friends. I love reading manlove as much as writing it, but I’ve also written M/F and ménage. My biggest dream is to own a fifty plus acre horse ranch where I can offer horses a haven to live out the rest of their lives in safety and comfort. Oh, and I want a corvette.

Where and/or how do you find the greatest inspiration?
Nature. Whenever I get stuck, I horseback ride in the mountains or talk my husband into taking me for a ride on our motorcycle or 4-wheeler. I have the opportunity to sit there and hold on and let my mind float. I’ve untangled many plot knots on those trips.

What’s the hardest part of a novel for you to write: Beginning, middle and/or end? Why?
I guess I’ll have to go with the end. It’s important to find resolution that’s not contrived or too easy, which I do struggle with at times, while making it believable and true to the characters.

Has your own life influenced your novels? And if so, how?
Yes. When I was younger, my mother and I listened to tapes together titled How to Build High Self-Esteem (a practical process for your personal growth) by Jack Canfield. I feel truly blessed to have done that with her. One of the things that really stood out to me was his emphasis on learning to love and accept yourself. This is a value that always seems to creep into my stories, even if in a subtle way.

Writing sex/romantic scenes can be a challenge for some authors. Do you find it difficult? If yes, how do you compensate? If no, where do you draw your inspiration?
Yes. There are only so many ways to insert tab A into slot B. When I write a sex scene, I always try to remember other scenes in the book as well as scenes I’ve written for other books. As a writer, I have to be very careful that they don’t end up sounding too similar.

Do you have a method you use to write the sensual parts? Do you prefer the sex to be open and bold? Or left to the imagination?
No. No method. Yes, I prefer the sex to be open, I don’t know about bold. Lol. Sex is a tool I use for character growth and relationship building. But I don’t care for sex, just for sex’s sake. There has to be a purpose behind it.

Are your characters based on people you know? Or are they completely fictitious?
Um – blush. Yes. I’ve written characters that are based on real people. Blue Moon Mating is a Halloween story to be released at the end of October. The female role has a lot of me in her. And the sequel – Four Under the Mistletoe (To be released Christmas 2011) – has a lot of characteristics of my brother in him.

Who is your favorite character, which you’ve created? And why?
I have two, and I love them because they’ve progressed into my muses. Both are characters I wrote for an epic fantasy book titled Wizard’s Secrets under the name R.L. Geerdes, which is no longer in print. Castin is a lithe, blond-haired, blue-eyed, half-elf, half-human druid (can bend earth and water to his will), and Cypris is a dark-haired brooding barbarian prince (quite the sexy warrior). When I wrote them, I always noticed the tension between them, but I thought it was because they were both alpha males. Castin became my muse first, and when I told him how much I loved paranormal manlove and planned to start writing it, he poofed out of my dining room. At first I thought he’d deserted me, and I just about hyperventilated. Five minutes later, he reappeared with Cypris at his side. How the hell was I supposed to know all that tension was actually sexual? lol

Can you tell us about your latest release? Give a synopsis.
My last release (September 1st) was Accepting His Animal – Book 3 in the Wolves of Stone Ridge series. - Doctor Gordon Digby came to Stone Ridge to help rescued shifters heal from their time abused by poachers. Finding a mate wasn’t even a blip on his radar. Fate throws a wrench in his plans in the form of sexy tiger shifter Grady Stryker. The man sets Gordon’s blood on fire and scrambles his senses. But Grady’s a detective, and the good doctor has secrets he doesn’t want revealed, including his own animal’s transgressions. Detective Grady Stryker believes finding your fated mate is the greatest gift a shifter can receive, so he doesn’t understand Gordon’s reticence, until a friend gives him a little insight into Gordon’s past. His resolve set, Grady realizes the best way to win his mate just may be the most fun: seduction. Grady’s plans get put on hold when more poachers appear in Stone Ridge. Except these humans aren’t really poachers. They know about shifters, and if they can’t capture them, they’ll eradicate them. Can Grady convince Gordon to accept him in time to stop the humans from harming more of their friends? Or will they be too distracted to see what’s right in front of them?

What’s your newest WIP? And when we can expect a publication date?
My newest WIP is Book 5 in the Wolves of Stone Ridge series. The working title is Finding His Home, but that could change. An expected publication date would be January 15th, 2012 (Book 4 in the series – Accepting His Human – is already complete and will be out on November 15th).

How many novels do you have, that are currently published?
I have 8 stories currently available through eXtasy Books (www.extasybooks.com), with another 6 to be released through January 15th with confirmed publication dates. You can browse my website – www.charlie-richards.com – to find titles and expected release dates. Yes, writing is my full time job, and I love it.
Where do you see your writing career in the next five to ten years?
Currently, all the stories I’m working on are paranormal in nature (I write M/F, M/M, and ménage) featuring shifters, gargoyles, demons, and humans, but I do have some ideas for a contemporary series as well, and maybe someday, I’ll write epic fantasy again. Hopefully, those will be written from the deck of that fifty acre horse ranch I want. =)

The actions of a wolf shifter gone rogue forces Ben Maxwell, the alpha of the Catskill Mountain wolf pack, to act on a vision of his mate quicker than he’d planned. He discovers that she’ll be at an aerial acrobat performance several days before Halloween, which also coincides with the blue moon. Unable to attend himself, he sends his best friends and betas, Adam and Devon, to seek Sandy out. He knows he’ll be sharing her with them and trusts them to care for her in his stead.

But Sandy is a human, and finding out that not only are shifters real, but that she’s mated to not just one, but three of them, is a lot to take in. Can Ben and his betas convince her to accept her place at their side before the pheromones caused by a blue moon on Halloween draws every shifter in the area to her door, including the rogue wolf that would rather see her dead than in the arms of anyone else?