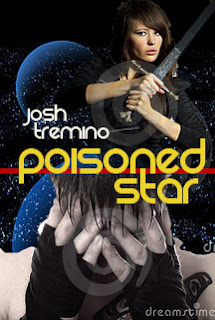 Hello sweeties! Welcome to another author interview Wednesday. Today I've got someone quite special, a Sci-Fi/Fantasy and Romance author, Josh Tremino. It's rare that I have a male author interviewed on BRB and especially one from the Sci-Fi/Fantasy realm. Sci-Fi and Fantasy are my all time favourites when it comes to movies and literature aside from yaoi and thrillers. So I'm thrilled to have Josh here today!

Tell us about yourself, Josh.
My name is Josh Tremino. I’m a sci-fi novelist, and my first book just came out. Poisoned Star is all about this girl who is forced to pilot an unstoppable warship and the hacker who tries to save her.

What’s the hardest part of a novel for you to write: Beginning, middle and/or end? Why?
I’m a big fan of outlining, so once I have the storyline in mind, I’m good to go. That said, the middle can be touch when I see I still have a good 45,000 words left to write.

Has your own life influenced your novels? And if so, how?
This question made me laugh. Because yes, my life definitely inspires my writing. In fact, my characters are almost always based on people I know. My girlfriend has decided I don’t write fiction at all.

Writing sex/romantic scenes can be a challenge for some authors. Do you find it difficult? If yes, how do you compensate? If no, where do you draw your inspiration?
I’m really good at writing foreplay, but the sex scenes themselves are harder. It’s difficult to find good descriptions for really taboo body parts.

Who is your favorite character, which you’ve created? And why?
My favorite character is probably Carson Winters from Poisoned Star. I love his devotion. I wrote him to be the perfect man and perfect boyfriend. He’s what I hope to be for my girlfriend.

Can you tell us about your latest release? Give a synopsis.
Poisoned Star came out in August, and it’s the story of this girl who has been kidnapped by a race of xenophobic aliens. They force her to kill in their name because they don’t want to be responsible for actual murder themselves. They trained and tortured her into submission. Now she’s alone with her warship and sent to destroy a human colony. For the first time though, humans have developed weapons that can actually harm her warship. As if that weren’t enough, a hacker slips aboard her ship. He offers her a choice between a violent past and an uncertain future.

How many novels do you have, that are currently published? Please list all the publishers, so the readers can locate you.
Infinite was published in 2010 by Black Rose Writing then Poisoned Star was published this year by Rebel Ink Press.

Where do you see your writing career in the next five to ten years?
I’d like to be a bestseller. Arrogant, I know, but I believe in aiming high.

Poisoned Star Excerpt
By Josh Tremino
Kayla, if you’re out there, if you read this,

The satellites recorded everything. The explosions. People running everywhere, terrified. Since the attack, I've seen it all. Even the military records. They couldn’t keep those from me either. I have been a digital witness to the destruction of our home and our families.
It took four minutes and thirty six seconds. Long range missiles fired from a million miles away, destroying the defense satellites. Alien fighters descended through the atmosphere and tore through our grounded ships. Nothing made it to the air. Alarms barely went off before the entire grid blackened to static.
They left the surveillance grid online, each of the satellites circling overhead. They recorded the alien ship. They watched its cannons grow from the hull and pummel our world from the safety of space. Hundreds of cameras and sensors took in thousands of hours of data. And I’ve worked through it all. Everyone else is accounted for.
Except we haven’t found your body.
You’re supposed to be dead. I get it. Lots of people would say I’m chasing a ghost, but they’re wrong. I don’t care what they say. I know you’re still out there and I’m going to get back to you. Nothing else matters. It’s you and it’s me.
In a better world, I’d be gone too. We should have shared the same fate. But the universe isn’t logical. Our best scientists make guesses and fill out their equations, yet it’s so uncertain. Everyone said I'd make a difference for our species. That’s why they pulled me out of school, put me through those special tests. They wanted to see what I could do.
Gone, off world, I didn’t see it, not until the flames died. Only charred bodies and broken buildings. Back on Earth, they held memorials. Politicians swore revenge and they sent out ships. None have come back. But now they have a new weapon.
This time will be different.
That’s the promise anyway.
In a couple hours we’ll jump back to the Caderis system and I’m pretty sure I know what’ll happen.  If I’m as smart as the tests say and if the rumors are true and I’ve put all of the puzzle pieces together just right, then I’ll get to see you again.
But if I’m wrong, if I don’t get to see you again, I hope you find this. I pray you’re alive and you know someone came for you. I didn’t forget.

--From the grid posts of Carson Winters
Thanks for stopping by, Josh. It was wonderful to have you and I wish you the very best of success! One quick announcement: I've been interviewed at Deep in The Heart of Romance and there's a contest. Stop by and you could win! Thanks Renee! The contest runs from Sept 6 to September 10, rules are simple, just leave a comment with my interview and you could win!
Happy Yaoi Hunting
Blak Rayne^_^!!
Contest With Blak Rayne @DITHR
Posted by Blak Rayne Books Blog at 9:57 PM