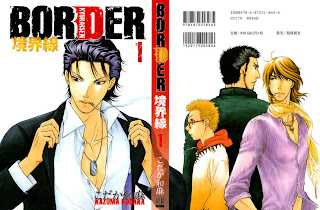 I don't deny it, Kazuma Kodaka is one of my favourites when it comes to yaoi artistry, plot and characters. Suffice to say her villains are even beautiful. But as everything I read, even by the same author, I try to remain open-minded and yes, a little skeptical. Just because I enjoy one series or book doesn't necessarily mean I'll automatically love everything the author creates. It just means I'm willing to take another of their creations for a test drive. 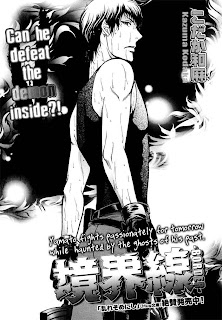 Of Ms. Kodaka's work I've read Midare Somenishi, Sex Therapist, Kizuna and now Border. And, I've got hand it to this woman, her work is stunning. From an artists eyes, I can honestly say I've yet to be disappointed. Her characters are trademark 'Kodaka' with the strong eyes, gorgeous hair and near perfectly proportioned body structure. Now, you can laugh when I say this, but body proportion in manga is essential, especially when you've got male characters going at it. You want them to look as natural as possible and proportion is everything. I've read some yaoi where the images were so disproportionate I actually ditched the book. With manga or comics, image is everything. And a bad or poorly drawn image can lead to a poorly thought out plot and bad translation. Trust me, I've seen it with many yaoi and I've read tons.

Getting back to Border… Wow another thoroughly enjoyable read for me. It has a decent plot, beautiful characters and it's well translated. Yamato Suo runs a detective agency with three friends, the office assistant Kippei Yaotome, the hair designer Tamaki Shinonome and the engineer Sogo Kitaoji. While solving cases each man is made to face his past and solve a mystery of his own. The first part of the book, you're introduced to the cast of characters and given a taste of their personalities while they're working several missions. 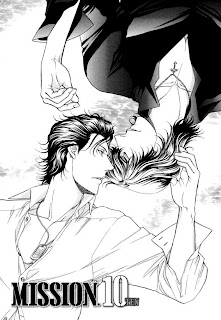 In Border 1 Yamato is the first to face his past. In his youth he trained and worked with a special forces unit. The team leader and other members put him through his paces because of his youth, his inexperience and they felt he was too pretty to be able to handle their line of work. Eventually he proves he's just as good as everyone else. After each mission the men drink and pick up women, but Yamato doesn't get involved. He's gay and there's no way he can ever allow the others to know. In time everyone becomes suspicious. One night the team leader, Will, decides to follow Yamato to find out what he does during his off time.

Will follows Yamato into a very rough neighbourhood and then he sees the young man pick up a guy outside a gay bar. He's horrified, of course, but I think also a little jealous. Throughout the story, Will is quite fond of Yamato and there appears to be some unintentional favouritism. Will beats the guy and argues with Yamato. Yamato lied about his sexuality. After the bitter quarrel, Yamato gives up. He's polite and promises to leave without causing any problems. He says he'll submit a discharge in the morning. This is where the story gets a little strange, but I love it anyway. 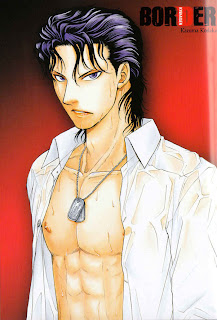 Will freaks and accuses Yamato of just giving up then he accuses him of sleeping around. He asks him if any man will do. Then Will says he'll have sex with him. He'll do anything to stop Yamato from leaving the team. He'll have as much sex as Yamato desires, anything. They wind up in bed at Will's place and they wind up having sex every night after that. In time a relationship blossoms and Yamato finds himself falling in love. I think, Will had it bad almost from the start. The story continues and the ending is bittersweet.

Anyway, so I don't spoil the entire book, I'll stop here! Border was good and I mean really good. I didn't have to force myself to finish it. The translation was well done, the plot kept my interest, the artistry awesome (proportionate) and the sex-yeah baby very hot as usual! I totally loved this one and I'm giving it five flames. I think I've found another winner. I've ordered Border 2, can't wait!