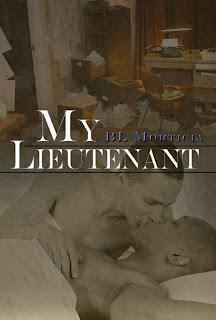 Good afternoon, sweeties! How has your weekend treated you so far? Mine's going to be a busy one (my brother's bringing the rug rats over for a BBQ). **ugh** LMAO Anyway, I shall survive. Today is special. Please welcome the multi-talented author and very dear friend, BL Morticia! BL is the ingenious invention of one Rawiya aka Michael Mandrake. I know it sounds confusing, but it really isn't.  I can't keep up to her. She's got so many WIP and accepted manuscripts for publication I'm lost. How many do you have now hun? Whatever, enough of my blabbering. Enjoy the interview!

Who is,  Blmorticia? Tell us about yourself.
BL is part of the Triad of writers in Sharita Lira’s head. She’s the wicked and snarky muse. I’m also the one that has the most fun! *laughs*
When did you know you wanted to become a writer?
When? Hmm… well I’m Sharita’s original muse. I started bugging her when she was 19. It was actually earlier than that but when the gal’s hormones started going nuts, that’s when she gave me a name.
Who and/or what prompted you to write your first novel?
Well, my first novella is My Lieutenant which will be out from Rebel Ink press in the fall. I love writing stories that push boundaries and have a humorous side to them so, this was a perfect opportunity. Look out because I’m just getting warmed up!
Where and/or how do you find the greatest inspiration?
Definitely in the music I listen to. The three of us actually have similar styles but I’m the metal gal. I like some hard rockin, head bangin’ music when I do almost every scene. Even during My Lieutenant, I listened to some old school rock.
What made you chose to write m/m literature in particular? And is there any other genre you’d like to write? And if so, why?
Well, I love men…dudes. *grins wickedly* It really does me good to see two men in a hot embrace. I also love the fact that m/m or gay writing is still considered taboo. That’s the Triad’s attraction as a whole but it’s more about loving to write stories about men in love and overcoming their struggles to be together. Uh oh, I’m sounding more like Michael Mandrake everyday! *Laughs*
As far as other genres, I do like some hetero too and since I’m into bondage, you will see some D/s stories from me in the near future. I intend to make the snarky, humorous, and boundary pushing erotica my imprint.
Which appears first when contemplating a new project: A character, the plot and/or the title?
The Plot…always. The story idea pops in my head and I immediately start writing it down, then come the characters; what I want my men and or women to look like. I get an idea and run with it. The next thing is fighting with Rawiya and Michael for time in Sharita’s head. I’m winning right now though because her next story is mine and has a deadline in 14 days! WOOT!
What’s the hardest part of a novel for you to write: Beginning, middle and/or end? Why?
Ugh, the end because I usually like to tie in the title or I’m worried that I didn’t cover all the bases in my story. Then there’s did I satisfy my reader? All of us are learning that.
Has your own life influenced your novels? And if so, how?
Well, Sharita’s very open minded. Will try most things once. In the writing realm, just about everything there is, she’s thought about doing. It’s great she’s that way too. She’s not afraid to tackle stuff. We’re starting out simple but as we get better, she’ll be doing some complex shit as well.
Writing sex scenes can be a challenge for some authors. Do you find it difficult? If yes, how do you compensate? If no, where do you draw your inspiration?
*laughs* Not difficult at all because I love sex. Doing it, Reading it, writing it, watching it on film. Porn is like one of my faves to get inspired by. I mean, I take note of the stupid shit they might say even if it’ll be corny. 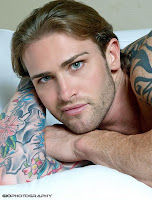 (David T, my muse in Happiness in Slavery WIP)
In the case of David Taylor, he’s had some really great lines that made me go, hmmm… STORY!
Do you have a method you use to write the sensual parts? Do you prefer the sex to be open and bold? Or left to the imagination?
It really depends on the story. I like to be bold and in your face most of the time, but sometimes my characters like to draw back a little. In My Lieutenant, we have a couple of cut away’s but only because they didn’t want to bore you. I assure you there is more coming from Bryant and Nathan though.
Are your characters based on people you know? Or are they completely fictitious?
Well, not anyone I know personally. *laughs* I mean, I do know some metal stars because of my ties in metal journalism. They know me when I go to shows and shit but do I call these people regularly? No. I will say, that the faces may match a couple of my characters. For ML, its Boris Kodjoe and John Taylor of Duran Duran in face only, just because they fit.
Who is your favourite character, which you’ve created? And why?
Right now? It is indeed, Nathan Ellerby.

(Nathan played by John Taylor)
Nathan is snarky, very much a smart ass and he’s sexy. He’s a combination of traits, a bit of an alpha and beta. A charmer and he has a good heart. He’s also loyal which I love.

(Bryant Duncan played by Boris Kodjoe)
Bryant is great too. He’ll be narrating their next book.
Can you tell us about your latest release? Give a synopsis.
Yep, my new release from Rebel Ink is My Lieutenant. Here’s a quick synopsis: Artist, Nathan Ellerby has been robbed, his apartment ransacked immediately after he broke it off with another man who disagreed with his life choice. Only minutes after walking through the rubble, there’s a knock at his door. When he goes to open it, a man steps in saying he caught the offenders and detained them till the police arrived. That hero is Lieutenant Bryant Duncan.
The young, handsome man was an officer in the Navy. Right away he works his charms on the artist, so much so, Nathan agrees to reward Bryant for his bravery. Duncan is pleased about this and accepts Nathan’s invitation. Sparks fly between the two, leading Nathan to believe there may be something in the works.
Once they get together for the meal, Lieutenant Duncan reveals to Nathan he has the hots for him, as well as letting him know of his past marriage to a woman, and the fact he’s beginning to lean over the fence about his orientation. Due to his past experience, Nathan is weary of beginning anything with the discharged officer, and decides he won’t fall for Bryant that easy.
However, Bryant, a master strategist, makes it hard for Nathan to resist. His looks, charms, and aura weaken the headstrong, Nathan, thus causing him to forget his own initiatives and break the barriers he’s put up around his heart.
This humorous game will continue throughout, with Nathan being faced with the decision of allowing the Lieutenant to be his lifelong partner.
What’s your newest WIP? And when we can expect a publication date?
The newest WIP by me is You Don’t Ask, We Don’t Tell and if it’s accepted, I hope for it to be out in the fall. *fingers crossed* I also have a novella already contracted with Naughty Nights Press called, Something New on the Menu. I’m really excited because we’re making it longer. Look for that to be out about the same time as ML or later.
How many novels do you have, that are currently published?
Me as BL none. Michael is the only one to have novels out. True Meaning of Love with and A Second Chance from XOXO will be out this month. To find out more, please look at our site. http://www.thelitriad.com
Where do you see your writing career in the next five to ten years?
Well, all of us would love to see our names at the height of best seller lists but really, as long as we as the Triad are still writing, making a decent living from it and are happy, that is all we can ask for. We love what we do and if Sharita would be quicker at submitting, we, the muses would be even happier.
Links:
http://www.thelitriad.com
http://srlmort.livejournal.com/ BL’s Blog
http://www.rebelinkpress.com/ Rebel Ink press
Thanks hun, the interview was great! A nice change from the usual. I have to get My Lieutenant - sounds awesome!
Happy Yaoi Hunting
Blak Rayne^_^!!
Posted by Blak Rayne Books Blog at 1:15 PM