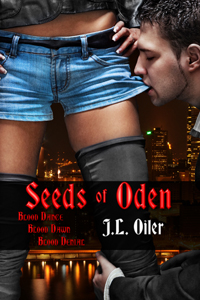 I know sweeties, it isn't Wednesday, but we're going to pretend that it is (just for the hell of it). LOL Life got in the way and I had to reschedule Jeanne's interview, and I'm so glad she could still visit. So please welcome author J.L. Oiler to BRB!
Who is, JL Oiler?
I am a reader, writer, mother, wife, lover, sister, friend, and a few things that I will not mention! (wink) I live in the mountains of West Virginia with my husband and children.
When did you know you wanted to become a writer?
I knew at a very young age that I wanted to write. I was the kid always creating a series of stories to entertain my friends.
Who and/or what prompted you to write your first novel?
Writing has always been my escape from the stress of the real world. After finishing one, my younger sister asked if she could read it and once done ask why I did not send it to a publisher. After much debate and her calling me a chicken, I took the leap.


Where and/or how do you find the greatest inspiration?
Everyday life is so much stranger than anything I could write. Therefore, there is an endless supply of inspiration right outside my window. I have found ideas from bits of a passing conversation, a song on the radio, or just a general observation.


What made you chose to write erotic literature in particular? And is there any other genre you’d like to write? And if so, why?
My husband tells me I am a very sensual individual. It just always felt right. Erotica is a sensual conversation within each of us. I have been known to spin a story or two for my son who loves to hear about the Adventures in Swampland (a fictional place created by my mother-in-law), though I have never taken the time to turn them into a truly written product.
Which appears first when contemplating a new project: A character, the plot and/or the title?
Most often, it is the plot. I will get one of those “What if..” moments and the story seems to start building itself from there. From that point the character start worm their way into my head and start sharing their story. Whispering their take on what’s going on and introducing themselves.


What’s the hardest part of a novel for you to write: Beginning, middle and/or end? Why?
The middle, I seem to always know where my characters are and where they want to be, but the journey along the way sometimes get a bit strained.


Has your own life influenced your novels?
I think you can find a bit of every author in the stories they write if you know where to look.


Writing sex/romantic scenes can be a challenge for some authors. Do you find it difficult? If yes, how do you compensate? If no, where do you draw your inspiration?
I don’t think writing a sex scene is hard, but being certain not to make it a repetitive same old same old scene can be challenging. Luckily I have a great imagination and a very loving husband.


Do you have a method you use to write the sensual parts? Do you prefer the sex to be open and bold? Or left to the imagination?
I like it open and bold in most cases. However I think it depends strictly on the character and their individual persona.


Are your characters based on people you know? Or are they completely fictitious?
Both, It is truly liberating to use a specific individual to base a character when there are thing you wish to do or say that the real world just does not permit.


Who is your favorite character, which you’ve created? And why?
Holly from Have Yourself a Rotten Little Christmas (Silver Publishing). She is a strong, smart, and take no crap character, who made me smile beginning to end. I have been told she is a lot like me.


Can you tell us about your latest release?
My Latest release is Seeds of Oden. It is actually three Paranormal Romance stories in one cover.


Blood Dance
The Crimson Erotica is Pittsburgh’s hottest nightclub and patron’s wait in line for hours to get through the door. No one would ever imagine, however, that it's something far different or that the shapely dancer who owns the club along with her two sisters is far from an ordinary human.
Named for the god of war, Ares has always lived up to the reputation. Born to be the bloodmate of Kaden, one of the leaders of an ancient race of vampire’s who've sworn to protect mankind from their predatory counterparts, Ares is torn between her promise to reunite her siblings and her desire for the one man who makes her pulse race.
Can Ares surrender to her destiny and help protect mankind from the evil that stalks them? Or will she just continue to sway in the denial of the Blood Dance...
Blood Dawn
Sol has always been different. Unlike the humans who surround her, Sol's nights are filled with meeting her craving for blood and protecting the residents of her small community from the evil vampires known as the Clage. Even to her own kind she's an anomaly. Her unique ability to walk in the sunlight sets her apart from any of her eleven missing siblings. Despite this, Sol builds herself a calm and relaxing home, moving about unnoticed, until the Clage and a breathtakingly gorgeous Nicaean male invade her world.
Forced to battle to reach the sisters she thought were lost and reunite her family, Sol also has an obligation to the humans she's sworn to protect. But worse, she has a growing love for the only man who can make her feel complete. Can Sol learn to except her differences and give herself completely over to the breaking of Blood Dawn?
Blood Denial
Loki knew the Nicaean that looked at her hungrily was trouble from the moment she laid eyes on him. What she never imagined, however, was that the condescending egomaniac would send her running for the hills or that she'd never be able to get the taste of him off her lips.  As the Clage move in with hopes of destroying Loki's world, can she let go and learn to live and love again and fight beside of the man who already owns her heart? Or is she bound to continue to run in a constant state of Blood Denial?
What’s your newest WIP? And when we can expect a publication date?
My newest WIP is a Twisted Erotic Fairy Tale (The Three Bears) scheduled for released as part of a Halloween Anthology. The release date is October 13th.


How many novels do you have, that are currently published? Please list all the publishers, so the readers can locate you.

Where do you see your writing career in the next five to ten years?
Well, I hope to see my titles dominating the top ten lists at all the major booksellers. Maybe even being able to write full time would fall in there.
Posted by Blak Rayne Books Blog at 1:00 AM