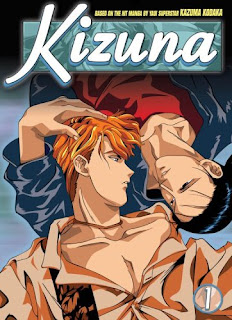 Aside from Ai no Kusabi and all the other yaoi that I adore, Kizuna comes in a hard first place with ANK. I’ve been in infatuated with Enjoji and Ranmaru from the first time I laid eyes on them. Everyone knows how I feel about Kazuma Kodaka’s work, she’s one of the best, as far as I’m concerned. The characters she’s created are beautiful and their personalities easy to love. 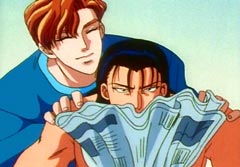 The next best thing apart from reading a manga is watching an OVA of your favourite manga. There are numerous highly popular yaoi that have been put to film. OVA means ‘Original Video Animation’, short movies that are specially made for home-video formats and are NOT generally released through TV or theatres previous. The only time part of an OVA is released to the public is to promote just as regular movie or book trailer. You can purchase OVA’s from Ebay, Akadot – just about anywhere, where yaoi media material is sold. 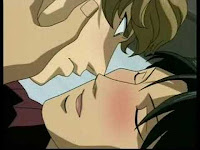 Another point I’d like to add, OVA’s aren’t always as detailed as the manga. If you stop and think about it, when does a Hollywood movie ever follow the novel (rarely). Parts are skipped, others changed.
The first Kizuna OVA–simply titled ‘Kizuna’ was released in nineteen-ninety four, but since has been combined in a part one and two ‘Signature Edition’ (2005) format with of course, Japanese and English subtitles. This original artistic work is well done but reminiscent of the old anime cartoon style. It will be a little confusing if you’ve never read the manga series, but if you’re a big yaoi fan, as myself, I do believe you’ll still find the story enjoyable. 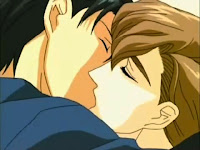 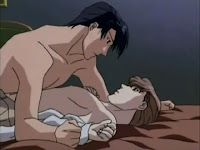 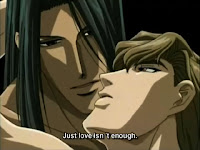 The tagline & blurb from the back of the OVA – ‘Three’s a Crowd’
‘Ranmaru and Kei have a strong and passionate relationship built on years of trust, sacrifice, and love. But when the mysterious son of a Yakuza boss starts to pursue Ranmaru’s affection, tempers flare, and hidden emotions rise to the surface. Will Ranmaru and Kei’s love survive this difficult test, or will the emotional conflict finally come to a head?’
The second, or should I say, third Kizuna OVA, titled ‘Much Ado About Nothing’ was released in two thousand and five. This OVA is my favourite based simply on two factors, this OVA better explains the beginning and growth of Kei and Ranmaru’s relationship, and the animation is to drool for. Yes, I said **drool**. The first compilation was well done, but the second, yeah okay Enjoji can turn into a real man any day and I’d take him! LOL The art director Haruyuki Genda did an awesome job. 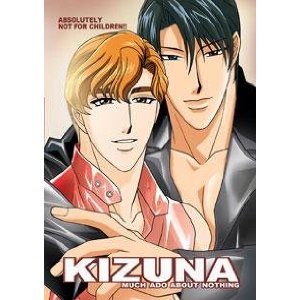 Blurb –
‘Ranmaru is a promising kendo champion. Kei is from a Mafioso family. They are two opposites to begin with, and now doubts and mistrust are creeping into their already shaky relationship. Phone calls from mysterious women and love hotel trysts amongst the cherry blossoms threaten to push the instability even further. Perhaps the only thing that can save these men are the fond memories of when and how they first met…”
I’ve purchased and watched both. The sex isn’t near as explicit as portrayed in the manga series, and this is where Kazuma Kodaka shines. This woman can draw men–and I’m talking hot men… Pardon me while I drool again. Oh sorry! LOL She has a gift, not only to weave an interesting tale but the artistry is second to none. It does take talent and a knack to draw anatomically correct men shagging, and Ms. Kodaka can certainly do it! LOL If you’re in need of some serious romance with tons of sex and a really great plot, look no further. As I stated before Kizuna is a long manga series but thoroughly enjoyable!
Out of curiosity, if you’ve watched the OVA and you’ve read the manga series, which did you prefer?
Happy Yaoi Hunting!
Blak Rayne^_^!! 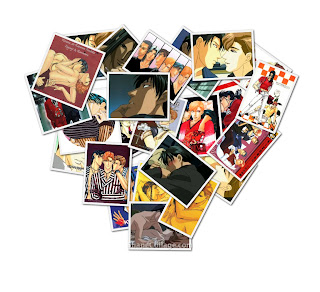