GIVE ME YAOI OR GIVE ME DEATH 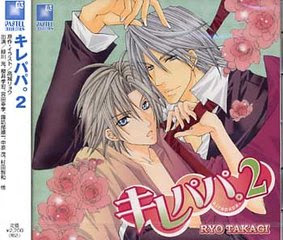 Sadly my world has come crashing down. As you all know, I'd planned a trip to Japan with my daughter for May, but due to recent events this trip has been put on hold. Right now my travel agent is fighting with the insurance company to get my money back. I spent a considerable sum on airfare, hotel and a tour package. I just hope things can be sorted out before it's too late. I'd still like to take a trip, but somewhere in the South Pacific. My daughter and I decided on Fiji, New Zealand and if we can Australia. We'd like to do a tropical rounder. ^_^!! But we'll have to see what becomes of this mess. 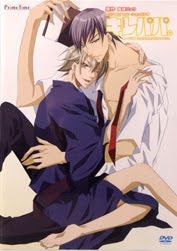 One of the big reasons we were going to Japan is our love of anime and of course, the food and culture. I've been a huge fan of anime since childhood. Yes I used to watch those cheesy old Japan anime - Transformers, Speed Racer etc. LOL Thank God the anime has  evolved since I was a child and now we're seeing such movies like Howling's Moving Castle, Strait Jacket, Apple Seed, Final Fantasy Advent Children and Ghost In The Shell. Television shows such as Bleach, Naruto, Sailor Moon, FMA and many others. Akira was one of the first moves that gave us a glimpse of what was to come. And speaking of the anime movies the manga has jumped ahead in leaps and bounds as well. Mainstream manga really is fantastic. The artistry has improved and there are some really excellent themes - Togainu no Chi, Basilisk, Death Note, King of Hell and so on, and so on. I could spend my entire blog listing off different mangas that are worth the time to read. There is also a video game empire dedicated to anime. But, of course, this whole post would be fruitless if I didn't mention, my favourite, yaoi. Admittedly yaoi isn't for everyone but it is for me! I have several drawers full of yaoi doujinshi and another full of the famous and more mainstream yaoi. For me there are no holds barred! LOL If the story is good and the characters gorgeous I'm in! 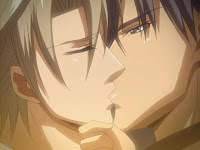 That is why going to Japan was so big for me. To actually be standing in an authentic yaoi manga store...and did you know there is a yaoi bar in Toyko? No kidding, you can seriously order drinks from some young, hot guy or bishi and take your picture with him! LOL There are yaoi fan girl tours! And there are even yaoi conventions where mothers argue with their daughters over which yaoi is the best! This genre of comic has it's own underground, cult type following and its membership has been silently growing for years.
If you're anything like me, you've probably noticed that certain yaoi volumes are listed at a very high price at online stores such as Amazon and Chapters/Indigo. I'm trying to complete several collections and this comes at fairly high price. In Japan most of these volumes are still available and quite cheap. (I was going to shop 'til I dropped) LOL But look no further Sakura Media.com and Akadot.com sell a number of these hard to find volumes at the regular issue price. They also offer clothes, OVAs, movies and a load of other interesting items. It's worth a look! Another awesome place to pa-rouse is Ebay!
Once Kizuna is done, my next collection project is, Kirepapa; written and create by Ryou Takagi. I've watched the OVAs but never read the manga series, and thank goodness Akadot was reading my mind! LOL If you prefer a lighthearted storyline, look no further. 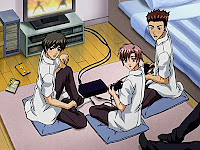 Senri Takashi is an author, father and recent divorcee who lives with his very pretty son, Rijyu. Rijyu has a number of classmates who enjoy visiting and frequent his home. Senri  has a twisted and deranged mind, and assumes that all these older boys are just biding their time, so they can have their way sexually with his son, when he's not looking (of course). He constantly talks to himself and envisions these ridiculous scenarios. So out of fear, he does all this weird and spiteful things to Rijyu's classmates, hoping to scare them off. But there is one student he can't seem to get rid of, Shunsuke Sakaki. Eventually he  discovers that all Rijyu's classmates aren't coming around to ogle his son, but actually him. Shunsuke ends up hitting on him and the story takes off from there. One example of the humour: Senri puts laxatives in food and feeds it to his son's friends. There are times where the music and expressions are priceless. I've added a read link. Read Kirepapa!

I haven't read the entire manga series yet, just started but so far the OVA and manga remain fairly true to one another. The OVA is very well done, the art superb and the plot does thicken. I'm giving this yaoi a flame rating of 3 - it isn't burn your retinas out hot but you still feel the heat! LOL


Before I let you go for the evening folks, remember to stop by again on March 30th. Author Destiny Booze will be here! Also a dear author and friend, Kharisma Rhayne, has a link she'd like you to check out. This is really important sweeties, we're talking about cruelty to animals:
Different Outlook - Kharisma Rhayne 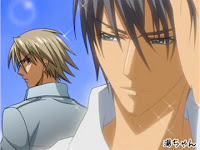