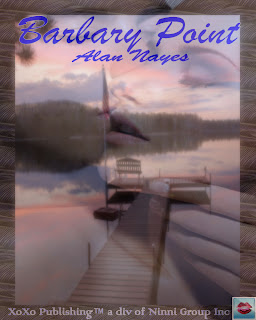 How many novels do you have, that are currently published? Please list all the publishers, so the readers can locate you.
GARGOYLES Tor/Forge  Gargolyes at Amazon
THE UNNATURAL Tor/Forge The Unnatural at Amazon
BARBARY POINT xoxopublishing.com  Barbary Point at XOXOPublishing.com
XOXO Publishing Shop
THE RED, WHITE and BLUE KITTY The Red, White and Blue Kitty  This is a bizarre tattoo short story with a twist--for mature audiences and it’s free!
Where do you see your writing career in the next five to ten years?
Wow, that’s a tough one. I know where I’d like to see it—further along than it is now. Hopefully a bestseller or two....or three…or…yeah, I’m wishing!
Alan Nayes Facebook


PROLOGUE
Mother always reminded me, ―Kelly, love from the mind is nothing more than a pleasurable arrangement, whereas love from the heart lasts forever.
I had listened to these same exact words beginning in junior high, again in high school, and throughout college. And it always worried me I might not be able to tell the difference.
A man I deeply loved once told me that a fish lunges after an artificial lure solely on instinct. He sees it, wants it, and zappo, he‘s hooked.
Love is a lot like that. You see someone you want, the chemistry is there, and zappo, you‘re hooked.

ABOUT THE AUTHOR
Alan Nayes was born in Houston and grew up on the Texas gulf coast. After attending medical school at the University of Texas Medical Branch in Galveston, he moved to Southern California where he divides his time and energies between medicine and writing. He is the author of the critically-acclaimed biomedical thrillers, GARGOYLES and THE UNNATURAL. His most recent release is BARBARY POINT, a love story.
An avid outdoorsman and fitness enthusiast, he is one of only a few individuals to  ever swim across Wisconsin’s chilly Lake Winnebago. When not working on his next project, he enjoys relaxing and fishing at the family vacation home in Wisconsin.