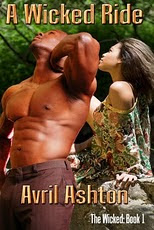 A Wicked Ride-blurb: Sasha Forde has hung up her thieving stilettos, but a visit from a mobster sends her right back to her old life. In order to save her family-and herself-from jail, she must steal evidence hidden in a lawyer's office. She sets out to do what she considers a simple B and E, but someone else has arrived first. And he holds her life in his tattooed hands. Not for long.

Niko Davaris is all about revenge on the man who tried to kill him. The evidence he stole is the first step in that direction. He's not thrilled to wake up with a gun to his head. The woman on the other end is cocky, smug, and too damn hot for her own good. He wants her, she wants the evidence. When she takes it and disappears, he gives chase. Battle lines are blurred as they give in to their bodies' temptation, but on a ride like this someone has to come out on top. Who will it be?

To read an exciting excerpt of this upcoming release hit this link: http://avrilashton.weebly.com/coming-soon.html

Avril's novel will be released: February 1, 2011 from eXtasybooks!!
I've added her link to the title of this blog - so you can visit her web pages! http://avril-ashton.blogspot.com


Also Avril has interviewed me today! We've both been busy! LOL You can catch my interview @ her blog by again, hitting the title of this one!
Thanks so much Avril for visiting my blog and I wish you the very best with your upcoming release!
Until my next post - Happy Yaoi Hunting!!
Blak Rayne ^_^!!

Posted by Blak Rayne Books Blog at 8:08 AM